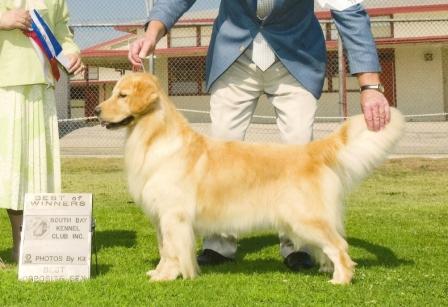 Garnet winning at Pasadena
Garnet finished her show career with 10 pts. She has produced 4 Champions making her an GRCA Outstanding Dam! She produced Saxon & Blair from her first breeding, Boogie from her 2nd breeding and Strut from her final breeding. All Garnet’s pups had stellar puppy careers. Both Saxon and Boogie won majors from the 6-9 puppy classes. Boogie won Best in Sweepstakes. Blair and Strut won Best of Opposite Sex Sweepstakes. In addition, Saxon won a Puppy Sporting Group 1. We are very proud of Garnet and her accomplished kids!!!
↑